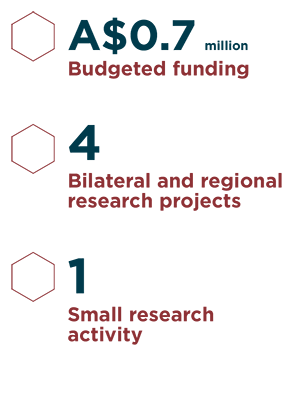 Agriculture is the largest economic sector of Nepal, supporting the livelihoods of 66% of the population and contributing 36% of national GDP. Farming is largely subsistence in nature and cropping is mostly integrated with livestock production.

Nepal has seen much political change in recent decades. In 2008, the country became a republic, ending 240 years of monarchy. In 2015, after a series of short-term governments, Nepal’s new constitution established a secular democratic republic with a federal system of 3 tiers of government.

Agriculture in Nepal is highly diverse due to the wide range of climates and geographies in the country. The challenges facing agriculture in the lowland Terai rice–wheat farming systems (part of the Eastern Gangetic Plains) are vastly different to those in the mixed crop–livestock–tree farming systems of the hill and mountain areas. Broadly, however, the challenges include:

Natural disasters also frame the recent history of the country. In 2015, the deadliest earthquake in 81 years struck Nepal, followed by hundreds of aftershocks and another severe earthquake 17 days later. The process of recovery continues. In 2017, Nepal was hit by devastating floods, causing US$172 million in losses and damage to the agriculture sector alone.

Nepal’s Agriculture Development Strategy 2015–2035 outlines a vision for a self-reliant, sustainable, competitive and inclusive agriculture sector that drives economic growth and contributes to improved livelihoods and food and nutrition security. It conceptualises transformation of Nepal from a society primarily based on agriculture to one that derives most of its income from services and industry. The 20-year strategy aims to halve poverty in less than 10 years through an agriculture-led economy achieving improved governance, higher productivity, profitable commercialisation and increased competitiveness.

The Agriculture Development Strategy also guides policies that include women, and states that all agricultural programs will be designed to benefit women. It promotes women’s organisations and agroenterprises led by women through specific programs and recommends equal wages for women labourers. The strategy also promotes action to raise awareness of women’s rights to land, and builds the capacity of women to manage irrigation, water resources and finances.

ACIAR has supported collaborative research with Nepal since the early 1990s, including projects on small ruminants, wheat and legumes. The focus for ACIAR during 2021–22 continues to be the engagement of Nepal in a regional program to improve integration of soil, water, crop, livestock and tree components of the farming systems.

Increased farm and forest productivity remains a core priority of Nepal for collaboration with ACIAR to improve food and nutrition security of the rural poor. In the Middle Hills districts, where the impacts of earthquakes and floods remains, our program supports the request of the Nepalese Government to focus primarily on research to support increased timber production from community forests. Another area of requested focus is understanding the implications of federalism on agriculture in Nepal.

Given the common agricultural production challenges across the alluvial plains of Nepal, eastern India and Bangladesh, cooperative research linkages with neighbouring countries will be explored further during 2021–22. The focus will be on conservation agriculture, to address key issues such as declining soil health, burning of rice stubble, falling groundwater levels and inequities in access to water.

Nepal hosts an important regional research body – the International Center for Integrated Mountain Development. In 2021–22, ACIAR will work with the centre to identify prospective areas for research collaboration.

The research program addresses our high-level objectives, as outlined in the 10-Year Strategy 2018–2027, as well as specific issues and opportunities identified by ACIAR and our partner organisations. The following sections briefly describe individual ACIAR-supported projects and anticipated outputs in Nepal. The projects are grouped according to research program. Each project description is referenced in a list at the end of this section, which provides the project title and code.

In South Asia, adoption and adaptation of many farming system innovations are variable and low outside project areas, particularly for conservation agriculture-based sustainable intensification. A project led by Dr Fay Rola-Rubzen of the University of Western Australia will complete its research on understanding the decision-making behaviour of farm households using a behavioural economics framework. During 2022, the project will report on its testing of interventions on agricultural extension, input provision and service delivery, which are designed to encourage the uptake by smallholder farmers of innovations developed by other ACIAR projects. The project will also strengthen organisational and institutional capacity to better target interventions in the Eastern Gangetic Plains.1

Stripe rust (also called yellow rust) is a common and important disease of wheat worldwide. While fungicides can be used for in-crop control, genetic resistance is more economically and environmentally sound. A project led by Professor Robert Park of the University of Sydney has established and equipped a collaborative network of key wheat improvement centres across South Asia and eastern Africa. In its final year, it will consolidate the knowledge base to enable ongoing research and development at the centres. The project has identified markers linked to effective resistance genes, which can be used in pre-emptive breeding and the development of rapid diagnostic tests. The project, which aims to reduce the vulnerability of wheat to stripe rust in South Asia and eastern Africa, also benefits wheat production across the globe, including Australia.2

The Middle Hills of Nepal are home to 44% of the country’s population, and most people gain their livelihoods from a combination of agricultural and forest products. Most forest lands have been handed over to community forest user groups, largely with suboptimal management and very limited timber harvest. Previous work supported by ACIAR demonstrated the effectiveness of a silvicultural management package called Active and Equitable Forest Management to improve livelihoods, social equity and environmental impacts. Dr Ian Nuberg of the University of Adelaide leads a project to facilitate the adoption of the package, in order to improve forest management practices in community forests and on private land in Kahbre Palanchok and Sindhu Palchok districts. The project is working with 15 community forest user groups in each district, focusing on adoption of improved forestry practices; development of community forestry planning, governance and gender equity frameworks; and establishment of pro-poor, small-scale forest enterprises.3

The Eastern Gangetic Plains straddles Bangladesh, India and Nepal. The region is home to 450 million people and has the world’s highest concentration of rural poverty. People in this region have a high dependence on agriculture for food and livelihood security. A new project, starting in 2021, aims to understand the processes and practices of transforming food systems through diversification to improve farm livelihoods while reducing inequity, production risk and unsustainable resource use. Dr Tamara Jackson of the University of Adelaide leads this project that begins with understanding the existing context for diversification in the region, covering a range of different technologies, scaling interventions, and policies and programs. The project will consider these elements individually and demonstrate the interactions between them using case studies to highlight where and how diversification has occurred in the past. In subsequent phases, the project will identify priority opportunities with communities and determine their fit with projected climate change and water availability, and the impact of high-level policies.4

The Sustainable Development Investment Portfolio drew on Australian expertise and technologies to improve integrated management of water, energy and food production in the basins of the Indus, Ganges and Brahmaputra rivers. ACIAR supported 10 projects over 8 years within this program in Bangladesh, India and Nepal. A small project will prepare delegates to build on the outcomes of the Sustainable Development Investment Portfolio at international and regional dialogues in the second half of 2021. Led by Dr Avinash Kishore of the International Food Policy Research Institute, a core team of local partners will undertake participatory ‘foresight for food’ exercises in their respective domains and then communicate their aspirations and concerns to policymakers and other stakeholders in the regional food systems.5