Bougainville cocoa among the world’s best

A sample of Bougainville cocoa beans has been recognised among the top 50 in the world.

Grown by the Bougainville Department of Primary Industries at its research station in Kubu, near Buka, the samples were submitted to the Cocoa of Excellence 2021 competition in Paris, where it was judged alongside 235 cocoa beans.

ACIAR, with co-funding from the Department of Foreign Affairs and Trade, has been working in Bougainville to improve cocoa production and quality, market access and healthy living for smallholder farmers.

ACIAR Research Program Manager for Horticulture, Irene Kernot, acknowledged the project team for improving the quality of cocoa and the livelihoods of rural farmers.

‘The festival, together with improved varieties, farming techniques and other interventions by the project, is improving the level of cocoa quality that is now catching the attention of the world,’ Ms Kernot said.

Project Coordinator in Bougainville, James Bututu, who submitted the samples, said the results from this round of judging already show that the quality of Bougainville cocoa is improving.

He acknowledged the research and said the partnership has paved the way for Bougainville cocoa to be recognised globally, ultimately making cocoa farming more profitable to smallholder farmers.

‘This is the first time the Department of Primary Industries submitted samples to the competition under our own name with support from our partners. We look forward to the final judging in October,’ Mr Butubu said.

The Cocoa of Excellence competition is held every two years where cocoa samples from around the world are judged using a lengthy and rigorous elimination process.

The competition is co-ordinated by the Rome-based Alliance of Biodiversity International and the International Centre for Tropical Agriculture from South America.

The program aims to explore and develop cocoa that will add diversity to the varieties available to producers worldwide and ensure the industry can prosper through better genetics and good quality and unique flavour profiles.

The Bougainville cocoa value chain project is one of five supported through the Transformative Agriculture and Development Program (TADEP) – a six-year multidisciplinary research program that aims to improve the livelihoods of rural men and women in Papua New Guinea. 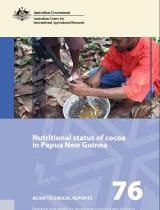