PNG sweetpotato farmers to benefit from access to new markets

The recent market analysis, funded by the Australian Government through ACIAR and the Department of Foreign Affairs and Trade (DFAT), was the first of its kind in PNG and revealed an increasing number of consumers in Port Moresby are preferring to buy their fresh produce from supermarkets, citing convenience and safety.

While this trend could see a decline in customers at traditional farmer markets, PNG and Australian researchers say it could create new market opportunities for rural communities.

‘Farmers are looking for stable markets where they can receive more consistent prices for better-quality produce,’ said Professor Philip Brown from Central Queensland University (CQU), who is leading the research project.

‘The research shows that consumer behaviour is likely to support an expansion in the supermarket sector in large urban centres, and this is positive news for the farmers. This could allow commercial focused farmers to secure more stable market access,’ said Professor Brown.

The survey, which sampled 353 consumers, was part of ACIAR-supported sweetpotato research led by CQU and the PNG National Agriculture Research Institute (NARI) working to enhance sweetpotato value chains by improving the quality of the roots harvested.

Better quality and increased production of sweetpotato is leading to growth of supplies to supermarkets, which are keen to offer better fresh produce to customers.

‘The project, with support from the Fresh Produce Development Agency and NARI, is helping farmers to build their business skills and connect with emerging supermarket opportunities,’ said Professor Brown.

CQU Researcher, Kirt Hainzer, worked with researchers from NARI on the survey and said it was the first research effort to incorporate consumer behaviour and explore what role supermarkets could play in further developing PNG’s commercial sweetpotato industry.

‘The research sought to better understand and compare how consumers buy staples from open markets and supermarkets and to explore the preferences for purchasing staple foods as supermarkets increase the availability of convenience staples like rice.

NARI economist Raywin Ovah said with over a hundred varieties of sweetpotato in the country, the study also hoped to find out which of these consumers prefer.

‘Not all the varieties are preferred from a consumer point of view. There are only a few that consumers want based on the taste or health properties and that is what we want to also find out. Farmers can be provided with that information, so they produce those varieties that the market wants,’ said Mr Ovah.

The project to improve commercial sweetpotato production and marketing in the PNG highlands is one of five projects under the Transformative Agriculture and Enterprise Development Program.

The program is jointly funded by ACIAR and DFAT and aims to improve the livelihoods of rural men and women through private sector-led development, increased agricultural productivity and quality and to build individual and institutional capacity. 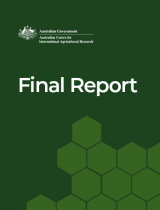