Soil and water monitoring tools are boosting the livelihoods of smallholder communities in Tanzania by reducing the time it takes to irrigate crops effectively, new research has found.

The findings show that farmers have seen up to a 65% reduction in the amount of time they use to irrigate, allowing for a greater focus on other agricultural tasks such as improving farm management leading to increased food security and improved farmer livelihoods.

The promising results were recently published by former John Dillon Fellow and ACIAR alumni Dr Makarius Mdemu of Ardhi University who is leading research activities in Tanzania under a wider project introducing these technologies to farmers in smallholder irrigation schemes.

‘With the saved time, farmers are improving farm management through more weeding and farming of other previously uncultivated plots, hence raising their farm yields.’

The project introduced farmers to the soil water and nutrient monitoring tools consisting of chameleon soil water sensors and wetting front detectors, helping demonstrate to farmers how over-irrigating their crops was negatively impacting the soil and crop productivity.

‘Farmers learnt that over-irrigation leads to the leaching of nutrients below the root zone, where they become inaccessible for the plants. In response, farmers reduced their irrigation frequency and duration, thereby significantly increasing their yields,’ said Dr Mdemu.

‘This a great example of technology being used in a way that creates value to the end-user,’ said Dr Robyn Johnston, Research Program Manager for Water at ACIAR. ‘Technology alone isn’t innovative; it’s how it’s used to add value to an existing system that underpins innovation.

‘Freshwater is an increasingly fragile commodity, particularly in arid continents like Africa and Australia, so enabling farmers to be more water-efficient is crucial to producing food more sustainably. The findings are very promising for smallholder irrigation schemes across southern Africa.’

The research findings, published in a special open access issue of International Journal of Water Resources Development, found the AIP approach helped introduce farmers to higher-value crops, better seeds, new markets and improved farming practices. As a result, farmers participating in the AIPs expanded their operations and now grow a more diverse range of crops such as, soybean, green maize, tomato, onion, and other vegetables.

The AIPs have also encouraged farmers to start using livestock manure on their farms after learning that the organic fertiliser option improves the soil condition and stays in the soil profile much longer than chemical fertilisers. A farmer’s quote in the refereed published journal article demonstrates how he has benefited from the practice.

‘We used to not apply fertiliser or manure. However, now that we know the fertility of the soil, we are using manure so that we can increase yields,’ said the farmer from Magozi.

Dr Mdemu said the learnings highlighted in this study could help to improve irrigation and innovation on smallholder farms across Tanzania.

ACIAR is funding further research to test how to scale up the findings to many other irrigation schemes in Tanzania, Mozambique and Zimbabwe.

The project is scheduled to run until June 2021. 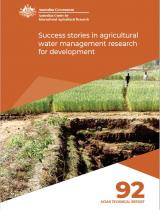